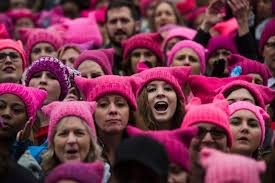 The Women’s March in Seattle was full of irony -not only because Dave Matthews was there, marching just ahead of us. My emotions ranged from joy to sorrow.  It was a turning point in the parental alienation narrative for our family.

I stood on the corner of Third and Marion.  A river of pink hat-wearing, sign-holding protestors wove through the street like a single thread. The sound of drums announced to all that peace is definitely not passive. As I stood on the corner, I hoped I would see my daughters. It was their dad’s residential day, and I knew they were participating. What were the chances of actually seeing them? I was going to jump in like the jumprope game of double-dutch.

I rushed over to join her.  On her sign was a quote from Dumbledore.  H. was standing in front of their group, holding hands with a girl I assumed to be the daughter of dad’s girlfriend.  Dad and girlfriend were not with the group at that moment.   Mother-in-law was there, sister-in-law, her kids and husband, and some of their extended relatives. My guy came with me to the march. He stepped into a Tully’s for a cup of sugar with coffee. I texted my coordinates to him and he joined us a few blocks later.  It was not the Brady Bunch, but I thought the adults would put the kids first. Gus was the one who yelled my name.

Gus was merry.  She was smiling… until her phone rang.  Then, her hand trembled.  She dropped the phone on the street.  She quickly picked it up and answered.  Her sign lowered.  She said, “Okay! Okay! Okay!” and hung up.  Then she turned to me and said, “I have to go.”

I said, “Go where?  This is a public march.” I laughed.  I had a feeling… I wanted her to be on her light, merry way.  But I also wanted to be with her. She was the one who yelled Mama.

She was quiet.  I said, “You’re trying to ditch me, right?” She was still quiet.

My mother-in-law spun around.  She said, “This is about her reconnecting with her father.  It’s his day.”

I said, “Every day is Gus and H. day.”  I had actually stolen a phrase their dad used.

It seemed dad and his girlfriend had left the group when they observed me cutting across the stream to join Gus. Protest continued all around us, but Gus did not hold her not hold her sign as high and proud as she had previously.  She fretted.

An aside: the mother of the daughters is not supposed to be present at the women’s march because their father does not want her there. Father’s mother works on his behalf.  The daughters’ father applies pressure for wanting the presence of their mother,  who historically carried the daughters in tow to many protests against war, hunger and injustice.  The daughters then feel bad, and associate that bad feeling with the presence of their mother. To the mother’s knowledge, this was her mother-in-law’s first participation in a public protest of any sort, but she digresses.

We eventually arrived at the location where their dad, his girlfriend and her son were standing.  I said hello.  He rolled his eyes. I said, “This must be your girlfriend. Would you please introduce us?” He introduced my guy first, which irritated my guy more than it irritated me. My guy is sensitive to all signs of “disrespect.” When dad introduced me, his affect was as if he had just tasted the most disgusting thing he had ever eaten in his life, maybe the liquid that collects at the bottom of a trash pail.

We all stood on the corner.  I took a few photos of the girls and their signs.  Mother-in-law approached me again. “You should go.”

She was flustered.  She was not used to a Heather that resists this particular form of power.   I lived my life as a Christian wife.  A good Christian gives.  A good Christian serves.  I did not see the ways that I had surrendered my own power in the context of my marriage, even while I went out and protested other forms of oppression.  This march was about the oppression of women, and this woman was telling me to leave –

After a while, she came back again. “We have to go. We have young children with us.”  I overheard an argument between my sister-in-law brother-in-law  about leaving.  He wanted to arrive at the end-point.  He said he’s not going- he’s staying. She was leaving. Irony abounded.

Dad began walking in the direction of “We have to go.”  I decided to walk in that direction as well.  Then, I noticed something.  My daughters’ faces were drawn down.  Their eyes were different. They were pale.  They were stressed.

I decided to let go. I said good-bye.

They walked away.  I noted when they were out of sight.   I allowed myself to crumble onto on Pike Street.  I sat down on the sidewalk and cried.  My guy looked like a person who saw  an impending train crash, but he’s human, and therefore could not stop it.  He was angry, frustrated, desperate, sad. It happened right in front of him, and he was powerless to stop it.  A woman stopped and asked me if I was okay. I said, “Yes, thank you.” Tears poured out of my eyes.  I couldn’t breathe.

My guy took my arm.  We walked slowly toward the ferry. I pretended to window-shop when emotion welled up and I couldn’t stop the tears.  I regretted going and I regretted staying and I regretted leaving.  The suffering I observed in my children’s eyes grieved me. I felt like it was my fault that they suffered.

Published by Waiting for Gus

This is a blog dedicated to describing my experience as a targeted/rejected parent in Seattle, WA. Thanks for stopping by. View all posts by Waiting for Gus